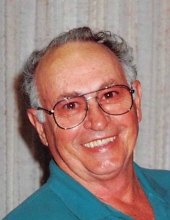 New Iberia - A Mass of Christian burial will be celebrated at 10 a.m. on Tuesday, March 23, 2021, at Our Lady of Perpetual Help Catholic Church in New Iberia, for Leonard James Kern, 91, who passed away on Wednesday, March 17, 2021. Interment will be in the Beau Pre Cemetery in Jeanerette. Rev. Garrett Savoie will be celebrant. A gathering of family and friends will be Monday, March 22, 2021, from 4 p.m. until 9 p.m. at Pellerin Funeral Home in New Iberia. A Rosary, led by the Men’s Rosary Group, will be prayed at 7 p.m. on Monday. Visitation will continue on Tuesday from 8 a.m. until 9:30 a.m. Leonard James Kern was born to Wesley and Jeanne Leonard Kern on February 16, 1930. He proudly served our country in the United States Air Force in 1947 and was honorably discharged as a corporal in 1950. Leonard was a longtime member of Our Lady of Perpetual Help Catholic Church where he served on the church council as well as being a sixth grade religion teacher for over 25 years. Leonard was an honorable 3rd Degree Knight on the Knights of Columbus Council #3425. He was blessed to retire at the age of 56 after 36 years of service with Exxon. For over 15 years he enjoyed volunteering for Brown Bag and St. Nicholas Concern with his friends Don and Juanita Kanutson and George Loflin. Each spring he treasured the time spent attending silent retreats at Grand Coteau with his son Wesley Kern. Leonard, “Skynerd,” as we affectionately called him, was very proud of the fact that he worked out at the gym well into his 70's. He picked up the love of golf in his later years and often commented that he wished he had learned to play sooner. He enjoyed his time on the greens with his golfing buddy Pete Peterson and other good friends through the years. After returning home from a round of golf, he enjoyed many at-home pool tournaments with his friend Hilton “Joe” Richard. He enjoyed helping his wife, Eloise, grow roses and vegetables, sharing the bounty with many grateful people. Leonard was an avid LSU and New Orleans Saints fan, but his all-time favorite team was the Catholic High Panthers. His sons Jeff and Wesley are Catholic High School alumni. He has been a Panther fan ever since. Being in the Superdome to watch them play for both Louisiana High School Championship games in 1962 and 2017 were his most treasured football game memories until just two years ago when he was no longer able to attend. Leonard is survived by his loving wife of 43 years, Eloise Simoneaux Kern; sons Wesley Kern (Elena) and Jeff Kern (Janet); his grandchildren Shelly Kern (Jim Jones), Karen Burdette (Tim, Carter, Ava), Lance Kern (Virginia, Skyla, Paisley), Katie Eskind (Brodie, Addi, Walker ) Kylee Kern, Blaine Menard (Carsen), Chad Menard (Bennett), his stepchildren and step grandchildren Kirk Boudreaux (Belinda, Shawn, Beau, Melanie Bergeron (James), Andy Migues and wife, Mark Boudreaux (Lana, Allison, Brandon (Sarah) and Ryan, Bert Boudreaux (David, Sabra Crappell), Vanessa Baker (Charlie, Carly, Taylor), Janine Boudreaux, Lawrence “Diggy” Boudreaux (Penny Benoit, Morgan (Olivia), Sarah); eleven step great-grandchildren; siblings Olive DeBlanc, Huey and Bitsy Kern, Charles and Harriet Kern and Cathy and Ron Hubbard; and a sister-in-law Cindy Kern. He was preceded in death by his parents, Wesley and Jeanne Kern; stepfather Charles Kern Sr.; sisters Muriel Thompson (Alvin) and Betty Duhman; brothers Jerome Kern (Jeanette) and Byron Kern; a brother-in-law Fredrick DeBlanc; and stepson Michael “Pico” Boudreaux. Pallbearers will be Wesley Kern, Jeff Kern, Kirk Boudreaux, Mark Boudreaux, Diggy Boudreaux, Shawn Boudreaux and Lance Kern. Honorary pallbearers are Bert Boudreax, Daniel Ardeneaux, Kerney Simoneaux Sr., Pete Peterson, Hilton Richard and Dalton Boudreaux (grandson). Our family is truly thankful to Hospice of Acadiana, Dr. Cousin, Dr. Valentino, Dr. Fabian Lugo and Connie Smith for the compassionate comfort and care they have provided for Leonard. In lieu of flowers please make donations to Catholic High School of New Iberia. Pellerin Funeral Home, 502 Jefferson Terrace Blvd., New Iberia, LA 70560, 365-3331.
To order memorial trees or send flowers to the family in memory of Leonard James Kern, please visit our flower store.

Lead by the Men's Rosary Group