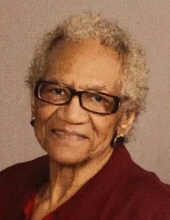 Breaux Bridge - A Mass of Christian Burial will be celebrated at 10:30 am on Wednesday, February 10, 2021, at St. Francis of Assisi Catholic Church in Breaux Bridge for Loisy Valsin Lewis, age 84. The family requests that visiting hours be observed at the funeral home from 7:00 am until 10:00 am on Wednesday. A rosary will be prayed at 8:00 am on Wednesday. Rev. Ugochukwu Jerome Cletus SSJ will officiate at the Funeral Mass. Interment will follow at St. Francis of Assisi Cemetery in Breaux Bridge. On March 19th, 1936 God blessed this earth with an angel known as Loisy Mae Valsin, who was born to the late Louis and Matilda Valsin. On Wednesday, February 3,2021, in the comfort of her home, God saw fit to call his angel back home. Loisy had an unwavering faith in God and continued to serve Him even when her health began to decline. Loisy Mae was a seamstress for 15 plus year at Martin Mills. She was also known as “The Cake Lady” for her famous cakes that everyone loved! She also enjoyed going to the casino, playing cards, sitting outside on the porch with her sister Lou Velma along with other family and friends, and taking care of her grandbabies. Lois was married to her husband, Melvin Lewis for 58 years until the time of his death in 2014. Lois leaves behind to cherish her memory her daughter Yvette (Kenneth) Joseph, son Alvin (Mary) Lewis, and her stepchildren who she took as her own, Jessica, Cheryl, Lakisha (James), Nicole (Kelvin), and Sydney. 7 grandkids; Michelle, Sharid, Victoria, Travis, Kaisley (Treyvias), Krashonda, and Emily. 12 great grandkids, 2 great-great grand kids, and a host of step grand & great grand kids who she loved. Her sisters Mary Thomas and Willie Mae (George) Frederick. Her brothers Alcee (Patricia) Valsin and Louis (Gail) Valsin Jr. Her sister-in-law who is more like a sister, Lou Velma Abraham. A host of nieces, nephews, relatives, and friends. She was preceded in death by her husband, Melvin Lewis; Mother and Father, Louis and Matilda Valsin; Siblings; Adam Valsin, Anita Potier, Linsay Solarie and Ezola Syes. Mother and Father-in-law, Mable Valere and Bradley Lewis; Brothers and Sisters-in-Law, Paul & Dorothy Vallier, Marie & Walter Nelson, Alton Williams, Milton Abraham, Larry Lewis, Johnny Lewis; stepson Darrel Wiltz; and nephew Judge Carl Williams. Pellerin Funeral Home of Breaux Bridge, 211 Berard St., Breaux Bridge, LA 70517, (337-332-2111) is in charge of arrangements.
To order memorial trees or send flowers to the family in memory of Loisy Valsin Lewis, please visit our flower store.