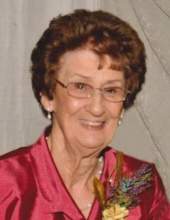 Breaux Bridge - A Mass of Christian Burial will be celebrated at 1:30 pm on Wednesday, March 31, 2021, at St. Bernard Catholic Church in Breaux Bridge for Marcelle Mondet Broussard, 94, who passed away on Sunday, March 28, 2021, at St. Martin Hospital. The family requests that visiting hours be observed at the funeral home from 7:30 am until 1:00 pm on Wednesday. A rosary will be prayed at 12:00 pm on Wednesday by Clifford Hebert and the Catholic Daughters. Rev. Blake Dubroc will officiate at the Funeral Mass. Readers will be Leah Rivera and Blake LeBlanc. Interment will follow at St. Bernard Cemetery No. 1 in Breaux Bridge. Marcelle was a faithful and devout Catholic and a lifelong parishioner of St. Bernard Catholic Church, where she served as a Eucharistic Minister to the homebound and was a member of the Altar Society, Catholic Daughters, and a local Rosary group. She and her husband, Earl, were instrumental in helping to organize the opening of St. Bernard Chapel of Perpetual Adoration, which was completed in 1984. They remained faithful adorers there for many years to follow. An avid fan of Breaux Bridge High School football, she loved watching her son, Paul, coach on Friday nights – she was his #1 Fan! As a pastime, she loved traveling, reading, doing word puzzles, cooking, and spending time with her family and friends. She will be greatly missed by her family and friends. She is survived by her two sons, Jay Broussard (Madeline) of Cecilia and Paul Broussard (Adrienne) of Breaux Bridge; four daughters, Virginia Champagne (Douglas "Gee"), Paulette Broussard, Liz Latiolais (Barry), and Melanie LeBlanc (Jeff), all of Breaux Bridge; son-in-law, Carl Marks of Arnaudville; twelve grandchildren, Leah Rivera, Lindsey Oubre, Lyle Champagne, Lance Marks, Jake Marks, Jena Benoit, Ryan Latiolais, Sadi Dworaczyk, Brice Broussard, Tiffany Latiolais, Blake LeBlanc, and Renee LeBlanc; and 19 great grandchildren. She was preceded in death by her beloved husband, Earl Joseph Broussard, Sr.; daughter, Suzanne Louise "Suzie" (Carl) Marks; and her mother, Virginie Berge Mondet. Pallbearers will be Lyle Champagne, Lance Marks, Jake Marks, Ryan Latiolais, Brice Broussard, and Blake LeBlanc. Honorary pallbearers will be her two sons, Jay and Paul Broussard, Clifford Hebert, Randy Anderson, Scott Angelle, and her sons-in-law, Douglas “Gee” Champagne, Barry Latiolais, Jeff LeBlanc, and Carl Marks. The family would like to express their gratitude to Drs. Warren and Benjamin Degatur, Wendy Fuselier, PA, and their staff, Karen McFaul, St. Martin Hospital and their staff, Dr. Adam Kennedy, Ochsner Lafayette General Orthopedic Hospital and their staff, and all of her caregivers that provided love and care to her for so many years. Pellerin Funeral Home of Breaux Bridge, 211 Berard St., Breaux Bridge, LA 70517, (337-332-2111) is in charge of arrangements.
To order memorial trees or send flowers to the family in memory of Marcelle Mondet Broussard, please visit our flower store.