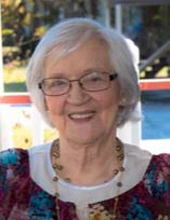 Breaux Bridge - A Funeral Service will be held at 1:30 pm on Friday, February 26, 2021, at St. Bernard Catholic Church in Breaux Bridge for Mary Ann Bordelon, 91, who passed away on Monday, February 22, 2021, at her residence surrounded by her family. The family requests that visiting hours be observed at the funeral home from 10:00 am until 1:00 pm on Friday with a tribute to Mary at 12:45. Deacon Marcel “Butch” Hebert will officiate at the Funeral Service. Mary was a parishioner of St. Bernard Catholic Church. She was a true entrepreneur who was the owner and operator of a daycare-kindergarten, Mary B's Craft Shop, and the Silver Derrick Lounge along with her husband, Joe. She spent her life giving to others - as a nurse, as a mother, as a volunteer and as a Matriarch of her family. Mary was very creative and a master at crocheting, sewing, and arts and crafts. She loved sharing her crafts with her family and anyone she met. She especially loved her yearly visits to St. Jude's Hospital where she would share her handmade creations with patients and their families. As a pastime, Mary and Joe enjoyed RV traveling throughout the United States. Mary always enjoyed being surrounded by people. She and Joe are the great love story that everyone dreams of. She was a fighter and one of the strongest people we've ever met. Mary beat the odds and made it through a lot, but she couldn't regain her strength after Covid. If all of us were half the woman she was, and loved by a quarter of the people who loved her, we would have lived an amazing life. She will be remembered for her beautiful smile, her strength as a woman, and her top honors as a nursing student at age 40. She is survived by her husband, Joe Bordelon of St. Martinville; daughter, Debbie (David) Schneider of St. Martinville; son, Eric (Gail ) Robicheaux of Maurice; her daughter-in-law, Patty Granger of Wichita, KS; grandchildren, Chris "Tiger" Granger, II, Billy Granger, Katie Doiron, Kellie Schneider, Jay Robicheaux, and Erryca Robicheaux; and her great grandchildren, Macie Gossen, Caden LeBlanc, Ava LeBlanc, Natalie Robicheaux, Candice Granger, Gabe Granger, Zach Granger, Savannah Granger, Vinny Granger, Skylar Granger, Nolan Granger, Briella Granger, Elizabeth Granger, Daniel Granger, and Billy Jo Granger. She was preceded in death by her parents, Oscar Dautreuil, Sr. and Rita Touchet Dautreuil; son, Chris Nolan Granger; brothers, Oray Dautreuil, Carroll Dautreuil, Oscar "Red" Dautreuil, Jr., and Herman Dautreuil; sister, Elaine Gautreaux; and a grandchild, Timmy Granger. Pellerin Funeral Home of Breaux Bridge, 211 Berard St., Breaux Bridge, LA 70517, (337-332-2111) is in charge of arrangements.
To order memorial trees or send flowers to the family in memory of Mary Ann Bordelon, please visit our flower store.