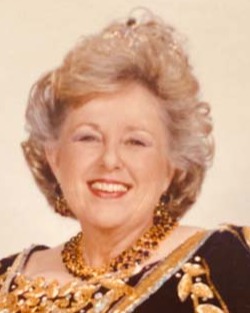 Entombment will follow in Beau Pre Cemetery in Jeanerette.

Msgr. J. Douglas Courville will be the Celebrant.

Visitation will be Tuesday from 8:30 am until 1:30 pm at Pellerin Funeral Home.

A native and lifelong resident of New Iberia, Mrs. Terrell was born on November 5, 1937, to the late Leonard and Mercedes Borne Vuillemot, and was a graduate of Mt. Carmel Academy. She was a former member of the St. Peter’s Church Choir and various Mardi Gras Krewes over the years. Mrs. Terrell enjoyed gardening, going to the beach and travels with her late husband, Eddie.

In addition to her parents, she was preceded in death by her husband of 49 years, Eddie Terrell, III; son, Tommy Terrell; daughter-in-law, Judy LeBlanc Terrell; sister, Mary Jane "Chubby" Leete; and a brother, Emile Vuillemot.

In lieu of flowers, please offer donations in Pal’s memory to the Carmelite Monastery at 1250 Carmel Drive, Lafayette, LA 70501.

To order memorial trees or send flowers to the family in memory of Mercedes "Pal" Terrell, please visit our flower store.