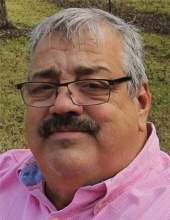 New Iberia - A Funeral Service will be held at 6:00 pm on Friday, September 17, 2021, at Pellerin Funeral Home in New Iberia for Michael Dean Mogerman, Sr., 64, who passed away on Saturday, September 11, 2021, in New Iberia. The family requests that visiting hours be observed at the funeral home from 4:00 pm to time of Service, then will continue after service until 9:00 pm on Friday. A rosary will be prayed at 5:30 pm on Friday.He will be laid to rest privately at a later date next to his wife, Pamela at St. Marcellus Catholic Church Cemetery. A resident of New Iberia, Michael Dean “Paw” Mogerman, Sr. was born in Paterson, New Jersey on October 26, 1956. He was nothing short of exclusive. He had his own unmistakable sense of humor, a crude character, and was one of the funniest and most unique people that some would ever meet. His input was always spot on, his opinions were unwavering, his jokes were raw, real and hilarious, and his love for all of his family and friends was substantially strong. Paw had a heart of gold, and was always willing to give or help out. He housed those in need, hosted an abundance of dinners, birthday parties, holidays, entertainment for the grandkids, hurricane refuge, crawfish boils, as well as simple visits that were good for the soul. He and his late wife, Pam, made their house into a loving home for their family, friends, as well as "adopted families" over the years. They both showcased love, hospitality, and compassion for those around them, and that act will never be forgotten. His presence in family events, vacations, and precious moments will be treasured by those who were fortunate enough to experience those with him. Anyone that knew Paw couldn't help but laugh with him and ultimately love him. He was most certainly one of a kind that will be missed greatly by so many.Mr. Mogerman is survived by a son, Michael Mogerman, Jr. (girlfriend Nicole Gil); two daughters, Kristy Mogerman and Alexandra "Allie" Mogerman (boyfriend, Kenny Rogers), all of New Iberia;; five siblings, Thomas Mogerman of Indiana, Margaret Harper of Las Vegas, Dan Artero of Kinder, Denise Austin of Katy, TX, and Samuel Mogerman of Shippingsburg, PA; twelve grandchildren, Chandler Mogerman, Drake Mogerman, Dax Mogerman, Kade Gil, Isabella Mustian, Xavier Mogerman, Marlie Gil, Landon Mogerman, Abigail Mogerman, Mikaela Mogerman, Fisher Rogers, and Iris Rogers; and his mother-in-law, Dorinda Broussard.He was preceded in death by his wife, Pamela Broussard Mogerman; three siblings, Jack Mogerman, Stacy Jeansonne, and Tammy Lytle; father, Louis Mogerman; mother, Janet Myra Martell; stepmother, Shirley Mogerman; and father-in-law, Joseph T. Broussard. Pellerin Funeral Home, 502 Jefferson Terrace Blvd., New Iberia, LA 70560, (337-365-3331) is in charge of arrangements.<iframe class="ts_player" allowfullscreen="true" allowtransparency="true" allow="autoplay; fullscreen" frameborder="0" height="330" scrolling="no" src="https://www.tributeslides.com/videos/embedded_video/Q42637QRT4993WSN" width="512"></iframe>
To order memorial trees or send flowers to the family in memory of Michael Dean "Paw" Mogerman, Sr., please visit our flower store.