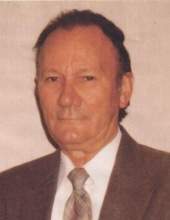 St. Martinville - A Mass of Christian Burial will be celebrated at 10:00 am on Friday, July 9, 2021, at St. Martin de Tours Catholic Church in St. Martinville for Nolan J. Boudreaux, 85, who passed away on Monday, July 5, 2021, at Our Lady of Lourdes Regional Medical Center.The family requests that visiting hours be observed at the funeral home from 3:00 pm until 9:00 pm on Thursday and continue on Friday at 7:00 am until 9:30 am. A rosary will be prayed at 7:00 pm on Thursday.Rev. Jason Vidrine will officiate at the Funeral Mass. Interment will follow at St. Michael Mausoleum in St. Martinville. Nolan was born on June 9, 1936, the middle child, on their family farm in Catahoula, to a loving family of eventually seven siblings and two loving parents.Nolan worked on his family’s farm until he went to work offshore on oilfield jobs.About that time, he met his one and only girlfriend, Delores Bonin. After they dated a year, a month, a week, and a day, they married on February 9, 1957. He worked for over 30 years in law enforcement. Nolan started as a radio operator for the City of St. Martinville in 1966. In 1968 he became a St. Martin Parish Deputy Sheriff for 24 years. A very dedicated employee, he only missed two days of work. He received an award in 1986 for solving the most major cases in Louisiana, with his P.S.E. Lie Detector Machine. He was promoted to Sergeant years before he retired on June 9, 1991.He was known as a nice, quiet, gentle giant, always kind and polite. As a Deputy Sheriff, Nolan was called upon to calm certain agitated and combative prisoners with his calm demeanor, gentle words of advice and a much-needed listening ear. After retirement, he worked as a Bailiff in the courtroom for five years.Nolan was the builder and owner of Boudreaux’s Trailer Park near Cypress Island for 21 years. He never evicted any tenant who could not pay their rent, even up to seven years of non-payment.Nolan was an excellent cook and he enjoyed cooking for family and friends. He enjoyed gardening for 49 years, growing all types of vegetables, and 30 fruit trees at one time, and always gave away extra crops.He was also a volunteer fireman for many years and helped save many homes.Getting people together was important to him. Nolan and Delores made many big family reunions. Every year they hosted four big Christmas suppers for club members, friends, siblings, and family.Nolan and Delores were married for 64 beautiful years, and they had four loving children, Karen Peltier and husband Edward of New Iberia, Connie Hammers-Cooper and husband Orville of St. Martinville, Tony Boudreaux and wife Donna Mallery of Houston, Texas, and Brady Boudreaux of Houston, Texas. They also have ten grandchildren, Daniel Hammers, Joshua Peltier, Kent Hammers, Blaise Peltier, Ashton Boudreaux Okoroji, Alex Hammers, Adrienne Boudreaux Wellborn, Andre Boudreaux, Landon Peltier, and Starlee Cooper (Pless); and five great grandchildren, Jonas Peltier, Gabrielle Peltier, Jaxon Pless, Avery Pless, and Ruby Kate Hammers; and two brothers, Joseph "Bootsie" Boudreaux and Larry Boudreaux. He was preceded in death by his parents, Sidney and Leontine Laviolette Boudreaux; brothers, Hubal Boudreaux, Voorhies Boudreaux and Deno Boudreaux, Sr.; and his sister, Lorraine Marie Maturin.Pallbearers will be Brady Boudreaux, Tony Boudreaux, Edward Peltier, Landon Peltier, Alex Hammers, Kent Hammers, and Andre’ Boudreaux. Pellerin Funeral Home of St. Martinville, 112 New Market St., St. Martinville, LA 70582, (337-332-2111) is in charge of arrangements.<iframe class="ts_player" allowfullscreen="true" allowtransparency="true" allow="autoplay; fullscreen" frameborder="0" height="330" scrolling="no" src="https://www.tributeslides.com/videos/embedded_video/7D247CKR4WQYP38G" width="512"></iframe>
To order memorial trees or send flowers to the family in memory of Nolan J. Boudreaux, please visit our flower store.