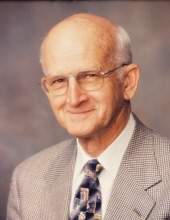 Breaux Bridge - A Mass of Christian Burial will be held at 10:00 am on Wednesday, August 18, 2021, at St. Bernard Catholic Church in Breaux Bridge for Percy John Castille, 91, who passed away on Saturday, August 14, 2021, at Abbeville General Hospital.The family requests that visiting hours be observed at the funeral home from 8:00 am until 9:30 on Wednesday.Rev. Andre' Metrejean will officiate at the Mass of Christian Burial. Interment will follow at St. Bernard Cemetery No. 2 in Breaux Bridge. Reader will be Terri Levasseur. Gift Bearers will be his daughters, Jennifer Castille and Janet Lahasky. Music will be provided by Jodi Bollick. Percy honorably retired from the U.S. Army National Guard after 31 years of service. He also retired with the Breaux Bridge Volunteer Fire Department after serving 40 years. Percy was the owner and operator of Broussard Hardware Store in Breaux Bridge, where he worked a total of 50 years. He was also a member of the Woodmen of the World and the American Legion. Percy was a hard worker his whole life and was a dedicated father and grandfather. He was loved by many and will be greatly missed. He is survived by his daughters, Jennifer Castille of Lafayette and Janet Lahasky (Dr. Ronald Lahasky) of Erath; grandchildren, Jordan Lahasky and Ann Marie Lahasky; and numerous nieces and nephews.He was preceded in death by his wife, Lucille May Latiolais Castille; grandchild, Joshua Lahasky; parents, Earl B. Castille and Henrietta F. Castille; and brothers, Ralph Castille (Gaynelle) and Patrick E. Castille (Grace). Pallbearers will be Jordan Lahasky, Ann Marie Lahasky, Dr. Ronald Lahasky, Aubrey "Buddy" LeBlanc, Jr., Melanie LeBlanc and Douglas Lahasky.Honorary pallbearers will be B.J. Latiolais, Jr., Harris Champagne, Carl Chitty, Bonnie Chase and Sandy Grant.The family wishes to extend a special thanks to his caregivers: Christine Guidry, Melinda Theriot, Monica Meche, Angie Melancon, Jodi Viator and Brenda Pugh, as well as, Dr. Ronald Lahasky, his son-in-law, for the care and compassion they gave to Percy. Pellerin Funeral Home of Breaux Bridge, 211 Berard St., Breaux Bridge, LA 70517, (337-332-2111) is in charge of arrangements.<iframe class="ts_player" allowfullscreen="true" allowtransparency="true" allow="autoplay; fullscreen" frameborder="0" height="330" scrolling="no" src="https://www.tributeslides.com/videos/embedded_video/JSQXWWQFH2C8P42S" width="512"></iframe>
To order memorial trees or send flowers to the family in memory of Percy John Castille, please visit our flower store.