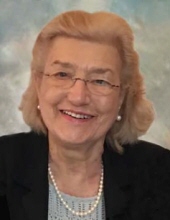 Breaux Bridge - A Funeral Mass will be celebrated at 11:00 am on Monday, January 11, 2021, at St. Bernard Catholic Church in Breaux Bridge for Rachel Broussard Stevens, 81, who passed away on Sunday, January 3, 2021. A rosary will be prayed at St. Bernard Catholic Church at 10:30 am on Monday. Father Blake Dubroc will officiate at the Funeral Mass. Rachel was born October 10, 1939 in Breaux Bridge. She was a dedicated wife, caring mother, and loving grandmother. Rachel was a devout Catholic, parishioner of St. Bernard Catholic Church, Secular Carmelite, and was also a Catholic Daughter. She was an original member, along with friends, called the "YaYa's." She was a music lover with a beautiful singing voice. In her spare time, she enjoyed traveling, reading, and volunteering for her church while helping others in need. She will be dearly missed by all who knew and loved her. She is survived by her husband of 62 years, Robert Stevens, Sr.; two sons, Robert Stevens, Jr. and Ed Stevens (Cheri); two daughters, Millie Stevens Jarrell (Jody) and Joleah Stevens Dumond (Bernard); and grandchildren, Maeve Dumond, Sarah Dumond, and Joshua Stevens. She was preceded in death by her parents, Isaac and Mildred Landry Broussard; and her son, Isaac Joseph Stevens. Pellerin Funeral Home(337-332-2111) is in charge of arrangements.
To order memorial trees or send flowers to the family in memory of Rachel Broussard Stevens, please visit our flower store.