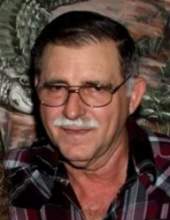 Breaux Bridge - Mass of Christian Burial will be held at 1:00 pm on Tuesday, August 31, 2021 for Raymond R. Dore', 70, who passed away on Tuesday, August 24, 2021, at his residence.The family requests visiting hours be observed at the funeral home in Breaux Bridge from 9:00 am until 12:30 pm on Tuesday. A Rosary will be prayed at 10:30 am on Tuesday. Rev. Nicholas DuPre' will officiate at the Mass of Christian Burial. Reader will be Clara Fontenot. Gift Bearers will be Curtis Angelle, III and Camryn Angelle. Interment will follow at St. Bernard Cemetery No. 2 in Breaux Bridge. Raymond had many jobs over the years, he was a server at Molbert's Drive Inn, where he first met his wife, Linda. He went on to be a Tug Boat Captain at Williams-McWilliams and T.L. James and then a Pipeline Welder at Dale Hart. He owned and operated his own welding company, Dore' Welding, Inc. Lastly, before retiring, he was the co-manager at Hebert's in Henderson. Raymond enjoyed spending time outdoors: raising livestock, fishing, gardening and playing with his fur babies, Pa Bon and Ruby. He loved his time spent with family, going to the casino, cooking and getting together for BBQ's. Raymond was an avid football fan and loved watching UL, LSU, and the Saints. He had a growing collection of Bowl Championship Caps. Raymond was a loving husband, father, grandfather, and brother, who will be greatly missed by all who knew and loved him. He is survived by his wife of 49 years, Linda Cameron Dore'; son, Brian Dore' (Michael Derveloy); daughters, Lacey Dore' (Brody Melancon), Cristy Dauphinet (Kyle) and Camey Dore'; sister, Renella Dore' Bonin (Robert); grandchildren, Gabrielle Devillier (William Valin, III), Tateum Devillier, Curtis Angelle, III and Camryn Angelle; and a host of nieces and nephews.He was preceded in death by his parents, Remy Dore' and Noelie Hebert Dore'; brother, Alvin Dore'; sister-in-law, Janelle Dore'; father-in-law, Norman Cameron; and mother-in-law, Laurance Cameron. Pallbearers will be Brian Dore', Michael Derveloy, Justin Bonin, Kyle Dauphinet, Brody Melancon, and William Valin, III.Honorary pallbearers will be Curtis Angelle, III and Robert Bonin.The family wishes to give a special thanks to everyone that has cared for Raymond over the years: Dr. Bose Cheeran, Dr. Moses Kitakule, Dr. Edward Dauterive, Dr. Georgios Constantinou, the late Dr. Gerald J. Elias, Jr., Dr. Reshma Bhanushali, the staff at Iberia General Medical Center, the staff of AMG, Kindred Home Health nurses: Carrie, Lauren and Carla and Community Hospice nurses: Karen and Zach. In lieu of flowers, the family requests donations be made to the Cancer Center of Acadiana of New Iberia. Pellerin Funeral Home of Breaux Bridge, 211 Berard St., Breaux Bridge, LA 70517, (337-332-2111) is in charge of arrangements.<iframe class="ts_player" allowfullscreen="true" allowtransparency="true" allow="autoplay; fullscreen" frameborder="0" height="330" scrolling="no" src="https://www.tributeslides.com/videos/embedded_video/26T43DHRPZGB57XK" width="512"></iframe>
To order memorial trees or send flowers to the family in memory of Raymond R. Dore', please visit our flower store.