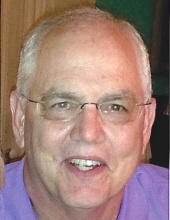 New Iberia - Although the timeframe was sooner than those who loved him would have hoped, Robert “Woody” Woodburn achieved his highest goal on October 18, 2019 when he drew his final breath on Earth and moved with love and wonder into the arms of his Heavenly Father, the One he sought to understand and know more fully, every moment of his life. Mass of Christian Burial will be celebrated at 10:00 am on Tuesday, October 22, 2019 at St. Peter’s Catholic Church, 108 E. St. Peter Street, in New Iberia, with Rev. Brent Smith as the Celebrant. Interment will follow in Memorial Park Cemetery. A Rosary will be prayed at 7:30 am on Tuesday at St. Peter’s Catholic Church, with visitation to follow from 8:00 am until 9:45 am. Woody was born June 1st, 1953 in Houma, La, and lived most of his life in New Iberia. He graduated from Catholic High School and later received his bachelor’s degree from Nichols State University. Most of his career, he was fortunate to work in an industry that he loved. He spent his working life providing food and services to the oil and gas industry, with the last 25 years at Doerle’s Food Services. Woody’s ability to build strong relationships with so many led him to his last role as the Senior Vice President of Doerle’s Food Service Energy and Marine Division. Woody was an incredible family man and devout Christian. What he enjoyed most in life was cooking and sharing laughs with the many family and friends that he loved and cherished so dearly. His ever-present smile and endless jokes were gravitating to everyone around him and his cooking was second to none. He also enjoyed golfing, hunting and fishing and the companionships that were made in the outdoors. Woody was an avid LSU Tigers fan and T.A.F. member who supported the purple and gold throughout all seasons. Most of all, Woody was a man of God who lived every day serving others as a true Samaritan and role model to all who knew him. As a devout Catholic, Woody served his church faithfully in many ways, some of which include serving as Lector, Altar Server, Usher, and Extraordinary Minister of Communion. Additionally, he was a member of the Bereavement Committee. Survivors include his wife of 43 years, Barbara Doerle Woodburn; son, Chad Allen Woodburn of Broussard; daughter, Ashley Woodburn Boudreaux and husband Joey of Youngsville; grandchildren, Ali Woodburn, Ryker Fontenot; brothers, Donald Woodburn and wife Joyce of Foley, Alabama; Patrick Woodburn of New Iberia; sisters, Chris Massett and husband Dr. Edward of Slidell; Phyllis Woodburn of Lafayette; sister-in-law, Carolyn Doerle Schumacher and husband Dr. William "Kip" Schumacher; brother-in-laws, Paul A. Doerle, Jr. and wife Mindy Bixler Doerle, and Gordon Doerle. He was preceded in death by his parents, Dr. Alonzo A. Woodburn and Evelyn Arheart Woodburn; sister, Nancy Woodburn Guidry; and brother-in-law, Frank E. Doerle. Pallbearers will be Donald Woodburn, Paul Doerle, Jr., Gordon Doerle, Chad Woodburn, Joey Boudreaux, and Johnny Musso. Honorary pallbearers include Dr. Ron Ray, Dan Spiller, Dr. Edward Massett, Dr. William "Kip" Schumacher, Johnny Habeeb, and James Verret. The family would like to give special thanks to both Palliative Medicine of Acadiana and Hospice of Acadiana, especially Lacy Guidry, for the wonderful care provided to Woody during his final days. In lieu of flowers, contributions may be made to the Disch DeClouet Social Service Center, 432 Bank Avenue, New Iberia, LA 70560. Pellerin Funeral Home, 502 Jefferson Terrace, New Iberia, LA 70560, 337.365.3331, is in charge of the arrangements.
To order memorial trees or send flowers to the family in memory of Robert "Woody" Woodburn, please visit our flower store.