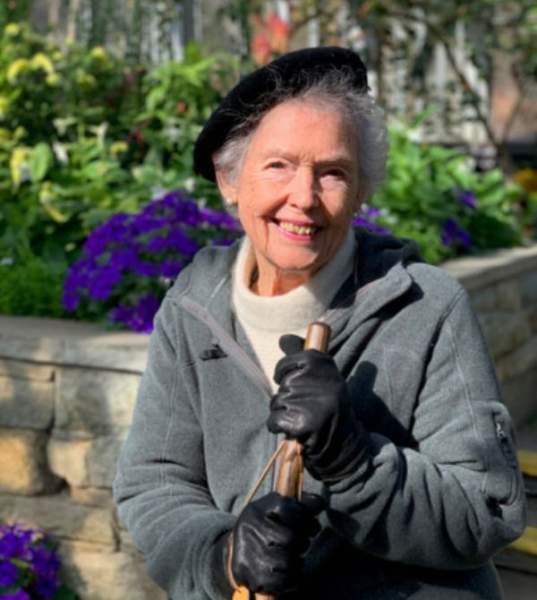 Myra “Sallie” (Beverley-Clarence) Varrelman, a.k.a. “Mawmaw,” died suddenly of natural causes on December 9, 2021 at her home in New Iberia. A Celebration of Life Service will be held Monday, May 9, 2022 at 4:00 PM in the Bayless Center at Rip Van Winkle Gardens on Jefferson Island, with a butterfly release and light reception immediately following. SallieMyra was preceded in death by her husband, Ferdinand “Kap” Varrelman and is survived by her two daughters and son-in-law, Linda Dautreuil and Sallie and Peter Chatfield.  She had four grandchildren: Jennifer (Andy Graycheck), Melissa (Rob Fuller), Kappes Chatfield (Joy Peterson), and Alexia Chatfield. She was also blessed with seven great grandchildren: Liam and Lorelei Graycheck; Channing and Charlotte Fuller; and Brave, Rayvn and Quinn Chatfield.

Born in Durban, South Africa in December 1927, and raised in England, she wielded her lilting British accent with irresistible charm, and made Southwest Louisiana her home for over 60 years. Coming from a childhood disrupted by divorce and WWII, she grew up in a very small family without knowing many details of her extended family. Perhaps that is part of the reason she feathered the nest of her heart with adopted friends and acquaintances for decades. Outfitted with a red beret and her endearing, twinkly eyes, SallieMyra had an unmatched zest for life, an epic capacity for love, and never left a conversation with a stranger.  Once she’d woven someone into her heart, they were there forever.

For decades, while out running errands or walking down a street, acquaintances from years gone by would approach her out of the blue just to say, “Hello, Miss Sallie,” and get another hug.  Such occasions happened so frequently that her family teasingly called her “The Mayor!”

SallieMyra longed to belong to the Acadiana area. In 1976, friends and colleagues of SallieMyra who recognized her devoted passion for Southwest Louisiana bestowed her with a certificate as an Honorary Cajun, a lovely acknowledgement of belonging that meant the world to her! And yet, it wasn’t until SallieMyra earnestly began researching her family genealogy in 2013 that she discovered she does have deep family roots in Acadiana and belongs in ways more profound than anyone could have ever imagined.

SallieMyra’s maternal great-grandmother, Margaret Sullivan, was born in Bayou Chene, Louisiana, in 1851 in a settlement in the middle of the Atchafalaya Basin less than 100 miles from New Iberia! (Margaret’s mother, Frances Texada Sullivan, was a direct descendant of Don Manuel Garcia de Texada.) Additionally, SallieMyra discovered that her great aunt, Eliza Sullivan Angers is buried in Rose Hill Cemetery on W. Main Street in New Iberia!

These unlikely discoveries were so remarkable that she published a memoir in 2020, entitled “This is Where I Belong,” explaining her incredible story.

Providing a capstone chapter to her personal story, SallieMyra discovered in 2019 unknown cousins, Margaret Richards and Jem Steere living in South Africa who could complete her family puzzle from her father’s side.  She was grateful to be able to reunite with them in Knysna, S.A. in December 2019 -- weeks before the pandemic shut-down. Her immediate heartfelt connection with Margaret and Jem underscored the fact that she does belong to family – not only adopted, but real -- far and wide.

Her final job turned out to be the most personally rewarding. Organizing Louisiana HonorAir flights to Washington DC through the Community Foundation of Acadiana gave SallieMyra a chance to show her deep gratitude to over two thousand American WWII veterans who had helped win the war that impacted her childhood in England. She spoke often of what an honor and privilege it was to say “thank you” to such heroes.

In addition to researching her genealogy, SallieMyra’s other passions included regularly walking the grounds of Rip Van Winkle Gardens and chatting up visitors. She was an avid reader and Friend of the Library; loved giving books away as much as she enjoyed collecting them. She adored New Orleans French Quarter and Garden District and came alive walking the streets there. She jokingly claimed that she was on a mission to find the best crème bruleé ever made and never missed an opportunity to try one!

While many people write gratitude lists, SallieMyra embodied her thanksgivings and chanted a perpetual mantra of “being so blessed!” Every little detail of her life was counted – from hot water in the shower, easy drives to get around town, red amaryllis bursting on the windowsill, or a simple sunset over her front porch. In truth, it was really we – all who had the honor and privilege of knowing and loving her -- who were exquisitely blessed. Mawmaw will be missed beyond words but will live in our hearts forever.

To order memorial trees or send flowers to the family in memory of Sallie Varrelman, please visit our flower store.