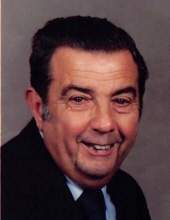 New Iberia - A Mass of Christian Burial will be celebrated at 1:30 pm on Saturday, September 18, 2021, at Sacred Heart of Jesus Catholic Church in New Iberia for Salvador "Buster" DiMarco, Sr., 92, who passed away on Monday, September 13, 2021.Interment will follow in the Holy Family Cemetery.Rev. Keith Landry will be the Celebrant.A gathering of family and friends will be Friday from 4:30 pm until 8:30 pm at Pellerin Funeral Home. Visitation will continue on Saturday from 11:00 am until 1:00 pm.A rosary, led by the Men’s Rosary Group, will be prayed at 6:00 pm on Friday.A native and lifelong resident of New Iberia, Mr. DiMarco was born on August 8, 1929 to the late Frank and Jenny Gulotta DiMarco. He proudly served our country in the U.S. Army, while stationed in Germany, during the Korean War. Mr. DiMarco was the owner and operator of a produce and firework business, was a longtime seasonal pecan buyer, and was a retired Captain from the New Iberia Fire Department. He also worked for the Iberia Parish Sheriff’s Office, and was the owner and operator of Fred’s Flower Shop. Mr. DiMarco was a member of the Knights of Columbus, and the Sacred Heart Rosary Group. He is survived by his three sons, Frederick DiMarco, Joseph DiMarco of New Iberia, and Salvador "Buddy" DiMarco, Jr. (Lisa) of New Iberia; granddaughter, Amber DiMarco of Lafayette; and special niece, Genevieve Kroszka.In addition to his parents, he was preceded in death by his wife, Theresa DeBiasi DiMarco; stepmother, Lillian "LeLa" DiMarco; and a sister, Rosalind DuVernay. Pallbearers will be Jackie Guillotte, Gerald "Jay" Carter, Butch Thomas, Gary Stoute, Michael Stoute, and Daniel Stoute.Honorary pallbearers will be Paul Gulotta, Ronald Martin, Ricky Delahoussaye, and Rosario Capritto.To view on-line obituary, sign guest book, and view video tribute, please go to www.pellerinfuneralhome.comPellerin Funeral Home, 502 Jefferson Terrace Blvd., New Iberia, LA 70560, (337-365-3331) is in charge of arrangements.<iframe class="ts_player" allowfullscreen="true" allowtransparency="true" allow="autoplay; fullscreen" frameborder="0" height="330" scrolling="no" src="https://www.tributeslides.com/videos/embedded_video/S953XQT869677QWT" width="512"></iframe>
To order memorial trees or send flowers to the family in memory of Salvador "Buster" DiMarco, Sr., please visit our flower store.