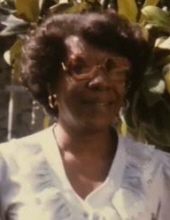 St. Martinville - A Funeral Service will be held at 10:00 am on Saturday, January 9, 2021, at Notre Dame Catholic Church in St. Martinville for Shirley Ann Williams, 75, who passed away on Thursday, December 31, 2020, at AMG Park Place. The family requests that visiting hours be observed at Notre Dame Catholic Church from 8:00 am until 10:00 am on Saturday. A rosary will be prayed at 9:15 am on Saturday. Fr. Cyriaque Sounou will officiate at the Funeral Service. Interment will follow at St. Michael Cemetery in St. Martinville. On June 16, 1945, a beautiful baby girl was born to Mary Lillie Mae Williams and Octave Williams in Broussard, Louisiana. Shirley was the second born child of Lillie Mae Williams and Octave Williams. Later, Lillie Mae was divorced, and relocated to Houston, Texas. There, she met Horace Shavers and they were united in marriage, so Shirley became the second born child not only to her biological father, but also to her stepfather, who loved, nurtured, and raised her from a young child. Shirley grew up knowing that God was in her life, also knowing that she was loved. She had a good life, and never forgot where she came from. She always loved to come back home to Saint Martinville for summer vacations and holidays. Shirley attended Catholic schools throughout her middle school years. In 1962, she graduated from Worthing Senior High School. She continued her education in business and received certifications in business and management and was employed with Union Pacific Railroad for well over 30 years. In her position, she had the opportunity to travel to California and Missouri where she added to her tenure with Union Pacific. She displayed great leadership, compassion, friendship, and care. In Redding, California she met Alfred Lewis and they were united in marriage. When Shirley’s mother got very ill, she wanted to be with her mom, so she moved back to Houston. When her mom passed, she moved back to California. Shirley was unable to have children, but she thought very seriously about adoption. However, she and her husband were divorced, and she never adopted any children. Throughout the last 2 years, Shirley struggled with several illnesses that her family had no knowledge of until much later. Due to her illnesses, she had to retire from Union Pacific in 2018. She finally agreed to relocate back home to Saint Martinville, where family could help take care of her. Shirley was a strong woman and very independent. She continued to say to us, “I’ve lived a good life; I am 75 years old!” Shirley was a great daughter, sister, and aunt. Although she will be dearly missed, Shirley did live a fulfilling life and her spirit will continue to carry on, but she will forever remain in our hearts. Shirley was preceded in death by her parents Mary Lillie Mae Williams Shavers and Octave Williams, stepfather Horace Shavers, brother Robert Bobby Williams, niece Vickie Barcus, aunts Florence Roberts, Alphonsine Mercier, and Lorenza Henry, uncles Thomas Kerlegan Jr., Frank Kerlegan, Albert Kerlegan, Lawrence Kerlegan, and Clarence Kerlegan Sr., grandparents Lovina Lee Kerlegan and Thomas Kerlegan Sr. She is survived by her Aunt Willie Mae Gedward of Saint Martinville, Louisiana, Uncle Roy Roberts Sr. of Saint Martinville, Louisiana, goddaughter Lovina Gedward of Saint Martinville, Louisiana, and a host of cousins in Louisiana, Texas, and California, and many friends in Texas, Missouri, and California. Pellerin Funeral Home (337-332-2111) is in charge of arrangements.
To order memorial trees or send flowers to the family in memory of Shirley Ann Williams, please visit our flower store.