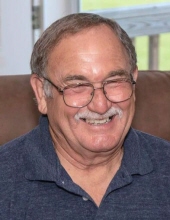 Breaux Bridge - A Mass of Christian Burial will be celebrated at 1:30 pm on Friday, January 22, 2021, at St. Bernard Catholic Church in Breaux Bridge for Simon Mozard Marks, 72, who passed away on Monday, January 18, 2021, at Lafayette General Medical Center. The family requests that visiting hours be observed at the funeral home from 8:30 am until 1:00 pm on Friday. A rosary will be prayed at 12:30 pm on Friday by Deacon Marcel “Butch” Hebert. Rev. Garrett McIntyre will officiate at the Funeral Mass. Interment will follow at St. Bernard Cemetery #2 in Breaux Bridge. Simon honorably served his country in the United States Air Force. He was a parishioner of St. Bernard Catholic Church and a member of the Knights of the Columbus. Simon loved exercising, repairing things at home, helping those in need of computer repairs, reading, and watching the History Channel. He loved visiting with his friends at McDonalds every morning after attending his daily Mass. He will be sadly missed by everyone who knew and loved him. He is survived by his wife, Joslyne Mouton Marks of Breaux Bridge; son, Christopher Jude Marks of Breaux Bridge; grandchild, Camden Jude Fugatt of Casper, WY; and his sister, Anna Lee (John) Hollier of Lafayette. He was preceded in death by his parents, Theophile and Maude Dupuis Marks; brother, Robert Lee Marks; and sister, Sophie Marks. Pallbearers will be Chris Marks, Casey Hollier, Joel Guichard, Landon Douet, Spencer Douet, and Jeff Castille. Honorary pallbearer will be Terry Courville. Pellerin Funeral Home of Breaux Bridge, 211 Berard St., Breaux Bridge, LA 70517, (337-3322111) is in charge of arrangements.
To order memorial trees or send flowers to the family in memory of Simon Mozard Marks, please visit our flower store.