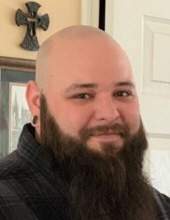 St. Martinville - A Time of Sharing will be held from 3:00 pm until 4:00 pm on Friday, May 7, 2021, at Pellerin Funeral Home in St. Martinville for Stefan Michael Mire, 32, who passed away on Sunday, May 2, 2021. A Visitation to celebrate Stefan's life will be observed at Pellerin Funeral Home in St. Martinville from 7:00 am until 3:00 pm. A rosary will be recited at 2:00 pm. Inurnment, immediately following the time of sharing, will be at St. Michael Cemetery in St. Martinville. Stefan was born on April 6, 1989, in Lafayette and was a resident of St. Martinville. He had an early love for music and began playing the guitar at the young age of 15. Stefan graduated from St. Martinville Senior High School in 2007. He worked as a rigger in the entertainment industry for many years. Stefan was known to his family and friends by many nicknames, but "Da Vanilla Gorilla" and "Pilot" were the two nicknames he admired most. His favorite band was Coheed & Cambria. Stefan had a passion for tattoos including his favorite band symbol, his dad's signature and a mural of Mary and Jesus, which he considered art. He had a sense of sarcasm that was sure to make anyone around him laugh, never missing a chance to make a witty comment or to tell a joke. Stefan was a loving husband, father, son, brother, grandson, uncle, cousin and friend. He will be sincerely missed by all who knew him. Stefan is survived by his beloved wife and best friend, Candace Richard Mire; his two sons, whom he adored, Ayden Michael Mire and Jaxon Jude Mire; his loving mother, Darla Landry Mire; his only sibling, his sister, Heather Mire Gonzales and her husband, Nick; his maternal grandparents, John and Betty Landry; his paternal grandmother, Jacqueline Resweber Mire; seven nephews and numerous aunts, uncles, cousins and dear friends. He was preceded in death by his father, Michael Anthony Mire and his paternal grandfather, Clifton Shelby John Mire, Sr. Pellerin Funeral Home of Breaux Bridge, 211 Berard St., Breaux Bridge, LA 70517, 337-332-2111 is in charge of arrangements.
To order memorial trees or send flowers to the family in memory of Stefan Michael Mire, please visit our flower store.