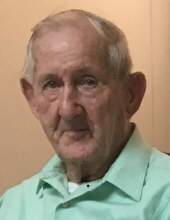 A Private Service will be held for the immediate family of Stephen Allemond, 88, who passed away on Saturday, April 18, 2020, at Opelousas General Hospital. As a life long member of the Henderson Bible Church of Henderson, Stephen was on the committee that monitored the construction of the newly built Church. During his earlier years, he could be found in his pirogue, fishing and kindly offering his knowledge and guidance to other fisherman in his community. Don's Seafood Hut in Lafayette was the recipient of his catch for each day and proudly displays a picture of him in both restaurants. Stephen will be remembered as a loving and Godly man who always put God first in his life. He always talked about his faith in the Lord and how proud he was of his wife, his children, his grandchildren, his dog and best friend, Buddy and his home that he cherished and worked hard for all of his life. His entire family will forever cherish the memories of 3:00 coffee at pops house. He is survived by his sons, Glenward P. Allemond and wife Nancy of Cecilia and Chris J. Allemond and wife Lynnette of Henderson; daughters, Stephanie LaFleur and husband Todd of Breaux Bridge, Marylynn LeBlanc of Henderson and Jamie Dupuis and husband Wendell of Youngsville; brother, Anatole Allemond of Parks; grandchildren, Daniel Allemond and spouse Maggie, Nicholas Hayes and spouse Demi, David LaFleur, Savannah Patin and spouse Neil, Dylan LeBlanc and fiancee Morgan, Brett Dupuis and spouse Krystie, Kale Stephen Dupuis and Alyssa Dupuis; great grandchildren, Anslee Hayes, Jace Patin and Madden LeBlanc; and his best furry friend, Buddy. He was preceded in death by his parents, Paul and Marie Aimee Allemond; wife, Nolia Allemond; granddaughter, Ciera LaFleur; and sisters, Nell Mae Thibodeaux and Yolande Stelly. Special thanks to Rita Hebert, his godchild, who was a blessing to the entire family and for the time she stayed with him before he was moved into the nursing home. The family would like to express their gratitude to J. Michael Morrow Nursing Home and staff for allowing Stephen to get his second wind of life before passing. Pellerin Funeral Home of Breaux Bridge, 211 Berard St., Breaux Bridge, LA 70517, (337-332-2111) is in charge of arrangements.
To order memorial trees or send flowers to the family in memory of Stephen Allemond, please visit our flower store.