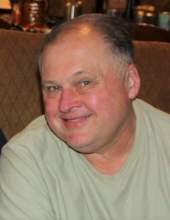 New Iberia - A Memorial Service will be held at 7:00 pm on Friday, May 28, 2021, at Pellerin Funeral Home in New Iberia for Tim Vice, who passed away on Wednesday, May 26, 2021 at the age of 64. Deacon Durk Viator will be the Officiant. The family requests that visiting hours be observed at the funeral home from 4:00 pm until 8:00 pm on Friday. A rosary, led by the Men's Rosary Group, will be prayed at 6:00 pm on Friday.A native and lifelong resident of New Iberia, Tim was a devoted husband, father, and grandfather. He was married to his high school sweetheart, Debbie Hall Vice, for 44 years. They had two sons, Ryan and Brant, and their home was always filled with friends, family, and neighborhood kids. In 2013, Tim retired from the City of New Iberia as City Tax Collector after 33 years of service, then began a new career as a barber at Vice's Barbershop. His father, Loveless, founded the shop, and Tim carried on the tradition of the infamous "New Iberia haircut." He selflessly volunteered his time on his days off cutting hair at area nursing homes.Tim was an avid gardener and recipient of the City's Yard of the Month many times. He loved watering the flowers almost as much as watching them grow, and his grass was so soft and thick. He was also on the Beautification Committee for the City of New Iberia. In earlier years he did woodworking as a hobby, and built their sons a huge wooden tree house with his own two hands. He was in a woodworking club, and a member of Combined Effort. Tim loved body building, and worked out at his gym in his barber shop. Those left to cherish his memory are his loving wife, Debbie Hall Vice; his sons Brant J. Vice of Youngsville, and Ryan T. Vice (Christina) of Broussard; his grandchildren Silas and Morgan Vice of Broussard, whom he adored; his mother Doris Derouen Vice of New Iberia; sister Karen Schexnayder (Arnold) of Baton Rouge; niece Kelsey Pasch (Austin) of Baton Rouge; and nephew Ben Schexnayder of Baton Rouge.He was preceded in death by his father, Loveless Vice; nephews, Max and Marc Schexnayder; and his parents-in-law, Ray and Earline Hall. Pellerin Funeral Home, 502 Jefferson Terrace Blvd., New Iberia, LA 70560, (337-365-3331) in charge of arrangements.<iframe class="ts_player" allowfullscreen="true" allowtransparency="true" allow="autoplay; fullscreen" frameborder="0" height="330" scrolling="no" src="https://www.tributeslides.com/videos/embedded_video/G3TSWT253X4CW52Y" width="512"></iframe>
To order memorial trees or send flowers to the family in memory of Tim Vice, please visit our flower store.