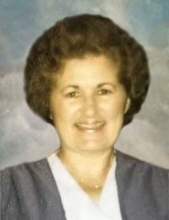 Breaux Bridge - A Mass of Christian Burial will be celebrated at 11:00 am on Monday, April 26, 2021, at St. Bernard Catholic Church in Breaux Bridge for Verna Dore Chris, 86, who passed away on Thursday, April 22, 2021. The family requests that visiting hours be observed at Pellerin Funeral Home in Breaux Bridge on Monday from 7:30 am and continue on until 10:30 am. A rosary will be prayed at 9:30. Father Blake Dubroc will officiate at the Funeral Mass. Readers will be Ronnie Dore and Ryan Boudoin. Interment will follow at St. Bernard Cemetery No. 2 in Breaux Bridge. Verna Dore Chris was born in St. Martinville, LA on May 17, 1934. She was a wonderful homemaker and was a loving and supportive mother to her two daughters. Verna enjoyed cooking, baking, gardening, and most of all spending time with her family. She will be greatly missed by all who knew her. She is survived by her daughters, Cynthia Granger (Al) and Catherine Migues (Ross); sisters, Lou Champagne and Gertie Trosclair; brothers, Henry Dore Jr. (Libby), Ronnie Dore (Brenda), Dieudonne "Boy" Dore (Helen), and Allen Dore (Nancy); and grandchildren, Alex Chris, Adam Olivier, Nicole Trahan (Ceasar), and Christopher Granger. She was preceded in death by her parents Mathelia and Henry Dore, Sr.; husband, George E. Chris; and sisters, Hazel (Wilson) Boudoin and Donnedieu "Donna" Laneaux. Pallbearers will be Alex Chris, Adam Olivier, Christopher Granger, Snapper Dore, Ryan Boudoin, and Jeff Trosclair. Honorary pallbearers will be Henry Dore Jr., Ronnie Dore, Dieu Donne Boy Dore, Allen Dore, and Ceasor Trahan. Pellerin Funeral Home of Breaux Bridge, 211 Berard St., Breaux Bridge, LA 70517, (337-332-2111) is in charge of arrangements.
To order memorial trees or send flowers to the family in memory of Verna Dore Chris, please visit our flower store.