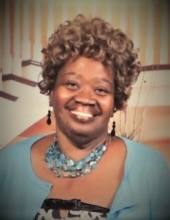 New Iberia - A Funeral Service will be held at 11:00 am on Friday, January 29, 2021, at Pellerin Funeral Home in New Iberia for Veronica Ann Small, 63, who passed away on Wednesday, January 20, 2021, at University Hospital in Lafayette. Interment will follow at Mt. Calvary Baptist Church Cemetery in New Iberia. Pastor Bradley Fulgence will officiate. A gathering of family and friends will be at Pellerin Funeral Home from 9:00 am until 11:00 am on Friday. A native and resident of New Iberia, Veronica Ann Small was born May 16, 1957. She was a 1975 graduate of New Iberia High School, and attended the University of Southwestern Louisiana. She was a retiree from Arc of Acadiana as an SIL Coordinator with over 20 years of service, in which she took great pride in taking care of her clients. She was a lover of music, sports, spoken word, and an anointed songstress. She had a God-given talent for cooking, and she adored all of her nieces, nephews and godchildren; but more than that, her greatest accomplishment was being a Nanny to ALL! Nanny is survived by one sister, Tyre Pierre Lewis of New Iberia; four nieces, Treasure Lewis, Tender Lewis, Toya Lewis, and Tempest Lewis, all of New Iberia; two nephews, Titus (Charlissa) Lewis of Dehnam Springs, and Titan (Joy Hanna) Lewis of New Iberia; great-nieces, Jardin Lewis, Zorey Porter, and Presley Segura; great-nephews, James Charles, Tramaine Charles and Gabriel Lewis; and godchildren, Dakota Alexander and Lemarionze Allen. She was preceded in death by her parents, Alex and Priscilla Raymond Pierre; and a brother, Albert Leo Small, Jr. Pallbearers will be Titus Lewis, Titan Lewis, Tramaine Charles, James Charles, Charlie Gant, and Robert Pinckney, Sr. Honorary pallbearers are Dakota Alexander, Gabriel Lewis, Lemarionze Allen, and John F. Graham. Pellerin Funeral Home, 502 Jefferson Terrace Blvd., New Iberia, LA 70560, (337-365-3331) is in charge of arrangements.
To order memorial trees or send flowers to the family in memory of Veronica Ann Small, please visit our flower store.