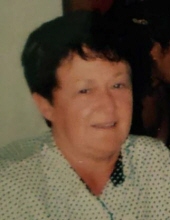 Breaux Bridge - A Memorial Service will be held at 3:30 pm on Saturday, February 20, 2021, at Pellerin Funeral Home in Breaux Bridge for Vicki Degeyter Garcia, 68, who passed away on Tuesday, February 16, 2021, at her residence. The family requests that visiting hours be observed at the funeral home from 1:00 pm until 3:30 on Saturday. Deacon Marcel "Butch" Hebert will officiate at the Memorial Service. Interment will follow at a later date. Vicki was born May 31, 1952 in Breaux Bridge. She was a beloved mother, wife, and sister. She enjoyed Zydeco dancing, cooking, vacationing with her family, and spending time with her grandson, Andon. She will be missed by her family and friends. She is survived by her son, Blaine Garcia; daughter, Billie G. Robin; grandchild, Andon Robin; sister, Donna Hamm; and two brothers, Ricky Degeyter and Danny Degeyter. She was preceded in death by her husband, Bill Joseph Garcia, Jr.; mother, Hazel Melancon Degeyter; and sister, Irene Marie LeBlanc. Pellerin Funeral Home of Breaux Bridge, 211 Berard St., Breaux Bridge, LA 70517, (337-332-2111) is in charge of arrangements.
To order memorial trees or send flowers to the family in memory of Vicki Degeyter Garcia, please visit our flower store.