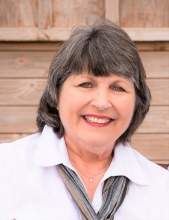 New Iberia - Funeral Services will be held at 2:00 pm on Friday, March 19, 2021, at Pellerin Funeral Home in New Iberia for Vicky Rodrigue Zagar, 66, who passed away on Tuesday, March 16, 2021, at Ochsner Lafayette General Medical Center. Entombment will follow at Holy Family Cemetery. Rev. David Denton will be the Officiant. The family requests that visiting hours be observed at the funeral home from 9:00 am until 2:00 pm on Friday. A resident of New Iberia, Vicky Rodrigue Zagar was born on December 21, 1954 to the late Calvin and Mary Lou Peveto Rodrigue. She was a faithful member of Highland Baptist Church, where she was very active. She taught Sunday school, was a prayer group leader, and was a mentor for many ladies. She had a servant's heart, and always put the needs of others first. She was a loving wife, mother and grandmother, and served the Lord with every ounce of her being. She touched many lives, and brought countless people to know Jesus because she loved Him enough to share that love with others. She is now sitting at the feet of Jesus, singing and pain free in her glorified body. Mrs. Zagar is survived by her husband of 46 years, Joey Zagar; daughters, Dayna Sullivan (Billy) of New Iberia, Kayla Frederick (Shane) of New Iberia, and Mary Hildago Frey of Iowa; six grandchildren, Tanner Sullivan, Baylee Sullivan, Nash Frederick, Lola Frederick, Colin Frey, and London Frey; three siblings, Gene Rodrigue (Sandra), Joey Rodrigue (Tina), Kevin Rodrigue (Toni); and a brother-in-law, Allen Broussard. In addition to her parents, she was preceded in death by a sister, Elizabeth Broussard; and her stepmother, Elodie "Dee" Rodrigue. Pallbearers will be Shane Frederick, Billy Sullivan, Joey Rodrigue, Kevin Rodrigue, John Labry, and Zane Zagar. Honorary pallbearer is Gene Rodrigue. Pellerin Funeral Home, 502 Jefferson Terrace Blvd., New Iberia, LA 70560, (337-365-3331) is in charge of arrangements.
To order memorial trees or send flowers to the family in memory of Vicky Rodrigue Zagar, please visit our flower store.