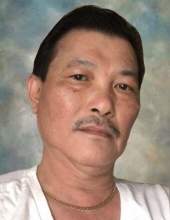 Breaux Bridge - A Mass of Christian Burial will be celebrated at 1:00 pm on Monday, August 23, 2021, at Pellerin Funeral Home in Breaux Bridge for Vu Van Nguyen, 58, who passed away on Thursday, August 19, 2021. The family requests that visiting hours be observed at the funeral home from 3:00 pm until 8:00 pm on Sunday and continue on Monday at 10:00 am until time of Mass. Rev. James Nguyen will officiate at the Funeral Mass. Interment will follow at a later date. Vu was born in Vietnam and throughout his life lived in Minnesota, Texas, and New Orleans. Most recently he was a resident of Breaux Bridge, LA. Vu attended the University of Louisiana at Lafayette, where he studied Electrical Engineering. He went on to work for many years at Seafood International. Vu was known to be an intelligent, kind, patient, gentle, quiet, compassionate, and loving person. He enjoyed spending time with his family, especially the time he spent fishing with his brothers. He will be greatly missed by all who knew him. He is survived by his three brothers, Long Nguyen (Luot Tran), Tru Nguyen (Molly Tran) of Henderson, and Hoang Nguyen of Dallas, TX; sister, Kim P. Nguyen (Tho) of Scott; and numerous nieces and nephews.He was preceded in death by his parents, Than Van Nguyen and Lien Thi Mai; and his sister, Christina Nguyen. Pellerin Funeral Home of Breaux Bridge, 211 Berard St., Breaux Bridge, LA 70517, (337-332-2111) is in charge of arrangements.
To order memorial trees or send flowers to the family in memory of Vu Van Nguyen, please visit our flower store.