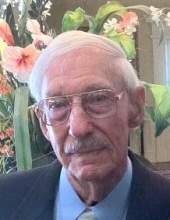 New Iberia – A Funeral Service will be held at 11:30 am on Monday, April 26, 2021 at Pellerin Funeral Home for Wilfred “Sed” Sedotal, who passed away on Thursday, April 22, 2021 in New Iberia. Interment will follow in the St. Nicholas Cemetery in Patoutville. Rev. Ed Degeyter will officiate. A gathering of family and friends will be Sunday from 2:00 pm until 8:00 pm at Pellerin Funeral Home. A rosary will be prayed at 6:00 pm on Sunday. Visitation will continue on Monday from 8:00 am until 11:30 am. Wilfred was born on October 10, 1929 in Patoutville, La. to Tebruce and Louise (Myers) Sedotal. Wilfred joined the Army at the age of 17 as a Private First Class and at the age of 18, he was honorably discharged with the rank of T-4, motor pool Sargent. Wilfred had many experiences during his career but he loved the oilfield most. Among the jobs he held to support his family, “Sed”, short for Sedotal, was proud of 9 years with McCullough Wireline. But mostly his career with Otis Engineering, A Halliburton Company. After extensive transfers, to get ahead with the company, including overseas, he retired with 30 years of service, in 1995. Wilfred then helped to build his and Ella’s retirement home in New Iberia. Wilfred was a jack of all trades. He could help with plumbing, electrical and carpenter projects. He was always happiest helping a friend or relative build or repair anything. He had a quick smile and never meant a stranger. Wilfred played golf and was an avid fisherman. He loved to grow Tabasco peppers and make “Sed’s Hot Sauce” to give away. Wilfred was known as “The Pepper Man” in New Iberia. Wilfred and Ella were very active in the foster care program opening their hearts and home to 17 foster children for various amounts of time. Also family members who needed a place to stay were also welcome. There was always room for one more. Wilfred was preceded in death by his beloved wife of 49 and 1/2 years; Ella Mae Daily Sedotal, Brother: Leonie “Slim” Sedotal, Sisters: Emerite Bourg, Leonie Duhon, Bernice York, Mae Sedotal, Eunice Genest, Corine Bourg, Florence Sedotal, his mother; Louisa Myers Sedotal and father; TeBruce Sedotal. Survivors include: one son: Neil Micheal Sedotal of Franklin, La; one daughter, Karen Sedotal Kinniff and husband David of Houma, La. Three sisters: Lois Randolph of Lafayette, Doris Chenevert of Franklin, Tn and Lillian Strother of New Iberia. Pallbearers will be: David Kinniff, Tommy Genest, Elwood Louviere, James Louviere, Lynn Gothreaux, and James Roy. Pellerin Funeral Home, 502 Jefferson Terrace Blvd., New Iberia, LA 70560 (337-365-3331) is in charge of arrangements.
To order memorial trees or send flowers to the family in memory of Wilfred "Sed" Sedotal, please visit our flower store.