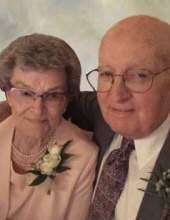 Parks, LA - William "Bill" Huval, (87) passed away peacefully on June 24, 2021, at his residence surrounded by his family members. Bill was born April 15, 1934, in Cecilia. Bill is survived by his three children; Mike Huval and wife Monica of Breaux Bridge; Liz Friedman and husband Billy of Lafayette; Christine Wright and husband Joe of Humble, Texas; four grandchildren; Brooke Huval of Houston, Texas; Rachel Friedman of New Orleans; Jacob Tauzin and wife Tiffany of Baton Rouge; Claire Smoczynski and husband Eric of Boston, Massachusetts; one great grandchild, Camille Smoczynski; two step-grandchildren Madeline Bonnette of Cottonport and David Wright of Dallas, Texas; two brothers Pat Huval of Parks; Leo "Pope" Huval and wife Judy of Cecilia; one sister Nita Champagne of Parks; and many nieces and nephews. Bill is preceded in death by his beloved wife of 66 years, Ethel Champagne Huval; his son David "Rock" Huval; his parents Aldus "Bala" and Helen Guidry Huval of Cecilia; his brothers Fred Huval, Ben Huval, and Paul Huval. Bill was a Cecilia High School graduate of 1952 where he lettered in Boxing for 3 years. Bill served his country as a member of the Louisiana National Guard from 1951 to 1960. He began working for Coca-Cola in 1954, retiring after 22 years as a Route Supervisor. In 1976, Bill became owner/manager of the Huval Insurance Agency of Loreauville for 16 years. He became a SLEMCO Board Member on June 1, 1981; was their First Vice President in February 1993; their Chairman of Purchasing Committee from July 1986 to June 1993 and officially retiring after 33 years with SLEMCO on April 15, 2014. While active with SLEMCO, Bill was also a Board Member with LREA - Louisiana Rural Electrification Administration in 2005, then Secretary - September 2008 and Board President - January 2009 through April 14, 2014. Bill was extremely involved in his church Parish community of St. Joseph's Catholic Church in Parks, where he served as a Lector, Usher, Trustee, and a life-long member of the church choir for 60 years. Bill was also an Honorary Life Member and Past Grand Knight of the Knights of Columbus Council #4927 of Parks. He was also a member of Carmelite Monastery Men's Guild for 18 years. Bill will be forever remembered for being such a kind and humble man, who took pride in everything he did in life. He will be truly missed by all those who loved and knew him.The family requests that visiting hours be observed at the funeral home in Breaux Bridge from 4:00 pm until 9:00 pm on Thursday July 1st and continue on Friday from 7:00 am until 9:30 am.A rosary will be prayed at 7:00 pm on Thursday. A Mass of Christian Burial will be celebrated at 10:00 am on Friday, July 2, 2021, at St. Joseph Catholic Church in Parks. Funeral services will be officiated by Rev. Nicholas Dupre', Rev. Ed Degeyter and Rev. Donovan Labbe'. Readers will be Charlotte Huval and Lucy Lissard. Gift Bearers will be Brooke Huval, Rachel Friedman, Claire Smoczynski and Jacob Tauzin. Music will be provided by Leo "Pope" Huval, Ade and Laura Huval, and Terry Huval.Pallbearers will be Adam Champagne, Chad Huval, Rowdy Huval, Tommy Huval, Paul Jude Huval, and Chip Usie. Honorary Pallbearers will be Easton "T-Boy" Bourgeois, Patrick "Pat" Leger, Ben Potier, Eldrick "Tee" Tauzin, Paul "Champ" Patin, Don Resweber, Norman Usie, David Dugas, and Earl Guidry.Interment will follow at St. Bernard Cemetery No. 2 in Breaux Bridge.The Huval Family extends their heartfelt thanks to Hospice of Acadiana - Nurse Alison Champagne, as well as caregivers Danielle, Jenna, and Yvonne for the loving care they provided. In lieu of flowers, please donate to Hospice of Acadiana, 2600 Johnston Street, Lafayette, LA 70503.Pellerin Funeral Home, 211 Berard St., Breaux Bridge, LA 70517 (337-332-2111) is in charge of arrangements.<iframe class="ts_player" allowfullscreen="true" allowtransparency="true" allow="autoplay; fullscreen" frameborder="0" height="330" scrolling="no" src="https://www.tributeslides.com/videos/embedded_video/WKM5G4CS4TJWZLRQ" width="512"></iframe>
To order memorial trees or send flowers to the family in memory of William "Bill" Huval, please visit our flower store.