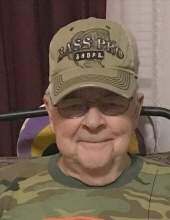 Parks - A Mass of Christian Burial will be celebrated at 3:00 pm on Friday, August 6, 2021, at St. Joseph Catholic Church in Parks for Willie James Guidry, 75, who passed away on Monday, August 2, 2021, at Our Lady of Lourdes Regional Medical Center.The family requests that visiting hours be observed at the funeral home from 3:00 pm until 9:00 pm on Thursday and continue on Friday at 7:00 am until 2:30 pm. A rosary will be prayed at 7:00 pm on Thursday.Rev. Nicholas DuPre' will officiate at the Funeral Mass. Interment will follow at St. Bernard Cemetery No. 2 in Breaux Bridge. Willie honorably served his country in the United States Army during the Vietnam War. He loved spending time with his family and friends, especially his grandchildren. As a pastime, he enjoyed fishing, hunting, gardening, and cooking. Willie will be fondly remembered for his warm-hearted spirit and his genuine kindness he gave to everyone. He will be sadly missed by all who knew and loved him. He is survived by his loving wife of 46 years, Linda Horton Guidry; son, Kyle Guidry; daughter, Lynette Guidry; six grandchildren, Tyler Guidry, Cheyene Dore, Kathleen Dore, Alexis Guidry, Blaze Dore, and Klaire Guidry; four brothers, O'neal Guidry, Clifford Guidry, Donald Guidry (Jackie), and Earl Guidry (Connie); and two sisters, Lena Choplin (George) and Margaret DeBlanc (Frank).He was preceded in death by his parents, Camille and Margaret Thibodeaux Guidry; and three brothers, Louis Guidry, Jessie Guidry, and Percy Guidry. Pallbearers will be Kyle Guidry, Donald Guidry, Earl Guidry, Tyler Guidry, Chris Desormeaux, and David Guidry.Honorary pallbearers will be Marty Guidry and Blaze Dore.Pellerin Funeral Home of Breaux Bridge, 211 Berard St., Breaux Bridge, LA 70517, (337-332-2111) is in charge of arrangements.<iframe class="ts_player" allowfullscreen="true" allowtransparency="true" allow="autoplay; fullscreen" frameborder="0" height="330" scrolling="no" src="https://www.tributeslides.com/videos/embedded_video/ZFPJDZ38LFKTSX92" width="512"></iframe>
To order memorial trees or send flowers to the family in memory of Willie James Guidry, please visit our flower store.