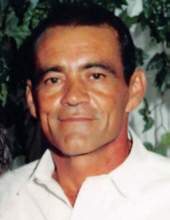 Henderson - A Mass of Christian Burial will be celebrated at 10:00 am on Saturday, September 4, 2021, at Our Lady of Mercy Catholic Church in Henderson for Wilton Lee " Mulate" Wiltz, 64, who passed away on Sunday, August 29, 2021, at his sister’s residence, surrounded by his family. The family requests that visiting hours be observed at the funeral home in Cecilia from 3:00 pm until 10:00 pm on Friday and continue on Saturday at 7:00 am until 9:30 am. A rosary will be prayed at 7:00 pm on Friday.Rev. Lloyd F. Benoit will officiate at the Funeral Mass. Readers will be Dana Dupuis and Doralis LeJeune.Interment will follow at St. Michael the Archangel Cemetery in Henderson. Wilton, affectionately known to many as, "Mulate", loved trapping, fishing, hunting, raising animals, and doing boucherie's for everyone to gather and enjoy. He had a witty personality, a big heart, and never said no to anyone in need. Mulate will be fondly remembered for the love he had for his family and his enjoyment of entertaining family and friends. He is survived by his daughter, Dawn Aucoin; three sons, Chance Wiltz (Bethany), Duke Wiltz, and Blake Wiltz (Tracy); sister, Dolores Dupuis (David); five grandchildren, Taylor Wiltz, Tori Robicheaux, Jordan Robicheaux, Sophia Wiltz, and Trinity Wiltz; and four great grandchildren, Audrey Comb, Zayne Darby, Giovanni Scaletta and Luciano Scaletta.He was preceded in death by his parents, Duclede Joseph and Germaine P. Wiltz; and his sister, Mary Alice Melancon. Pallbearers will be Chance Wiltz, Duke Wiltz, Blake Wiltz, Jordan Robicheaux, Garrett Knott, Gavin Mcgee, Kim Allemond and David Dupuis Jr.Pellerin Funeral Home of Cecilia, 2238 Bushville Hwy., Cecilia, LA 70521, (337-332-2111) is in charge of arrangements.<iframe class="ts_player" allowfullscreen="true" allowtransparency="true" allow="autoplay; fullscreen" frameborder="0" height="330" scrolling="no" src="https://www.tributeslides.com/videos/embedded_video/FN75RT9DXNFZ675X" width="512"></iframe>
To order memorial trees or send flowers to the family in memory of Wilton Lee "Mulate" Wiltz, please visit our flower store.