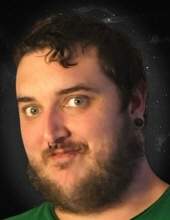 Breaux Bridge - A Funeral Service will be celebrated at 5:00 pm on Sunday, July 4, 2021, at Pellerin Funeral Home of Breaux Bridge for Zev Joseph Frugé, 31, who passed away on Friday, June 16, 2021, at Lafayette General Medical Center.The family requests that visiting hours be observed at the funeral home in Breaux Bridge from 11:00 am until 5:00 pm on Sunday.A rosary will be prayed at 2:00 pm on Sunday.Deacon Marcel "Butch" Hebert will officiate at the Funeral Service. Interment will follow at a later date.Zev was born June 12, 1990 in Opelousas, LA. After high school graduation he decided that truck driving was something he wanted to pursue so he completed schooling and has been driving trucks for the past seven years. He loved his job!Zev was a gamer of all sorts. His favorites were Magic: The Gathering cards, Pokémon GO, and anything he played with his brother, Zane. He was a prankster and enjoyed seeing the astonishing looks of people when doing something funny or out of the ordinary. Zev was known to get a good reaction out of people! He was a self-proclaimed "momma's boy" and cherished his time spent with his family and friends. He helped many friends throughout the years. Zev was intellectual and loved to debate anyone. He will be deeply missed.He is survived by his mother, Pam Fruge'; father, Joseph "Tony" Fruge'; brother, Zane Fruge'; girlfriend, Sarah Sarosky; godfather and uncle, Craig Guidry (Charmaine); uncles, Kevin Fruge' (Kathy), David Bush (Kristy), Bobby Charles Fruge', Gordon Fruge' and John Paul Fruge'; aunts, Adeline Sonnier, Michelle Fruge', Monica Fruge' (Dakota), Nicole Fruge', Ida Taylor and Angel Fruge’; Cousins, Saigen Bush, Aubrey Bush, Zack Fruge', Tristan Fruge' and Sophia Powell; paternal grandmother, Peggy Scott; paternal grandfather, Milton Bob Fruge'; and his best friend, Zachary Granger.He was preceded in death by his maternal grandparents, Clovis "C.J" and Gloria Guidry; cousin, Cami Guidry; and uncle, Shane Fruge'. Pellerin Funeral Home (337-332-2111) is in charge of arrangements.To view on-line obituary, sign guestbook and view video tribute, go to www.pellerinfuneralhome.com<iframe class="ts_player" allowfullscreen="true" allowtransparency="true" allow="autoplay; fullscreen" frameborder="0" height="330" scrolling="no" src="https://www.tributeslides.com/videos/embedded_video/XXSMNHKGLH64M5PD" width="512"></iframe>
To order memorial trees or send flowers to the family in memory of Zev Joseph Fruge', please visit our flower store.